The death of the Internet café

It was 2001 and Facebook wasn't even a gleam in Mark Zuckerberg's eye, and the "social media" phenomenon online was ICQ, which you dear reader, have probably never heard of. Checking email involved me rolling out 3 metres of twisted pair cable, jacking into the main phone line, and then dialling up Tiscali. A few beeps, squeals and whistles later I'd be connected at 14.4 kbps to the World Wide Web. I'd dump my emails, or connect to CiX using AMEOL. If that all sounds like a foreign language to you don't worry about it. Let's just say things were different. No Wifi, no iPhone, no high-speed Internet (unless you were a company that had forked out for your own Kilostream or Megastream leased line). Most towns back then had an Internet café. You could at least access a slightly faster Internet connection, print stuff out, and purchase a wide range of International phone cards, also a phenomenon largely consigned to the dustbin of history due to instant messaging apps like Line, Viber, Skype, and WhatsApp.

There's one Internet café that I remember well from back then. It was on the top floor of Central Plaza on Rama 3 in Bangkok. The top floor was largely devoted to all manner of electronics and computer shops. You could get mobile phones repaired, laptops fixed up, very cheap software of questionable legitimacy, and a wide range of other electronics-related services. Most of those shops were small Aladdin's Caves of flashing LEDs, electronics boards, and exposed hard drives.

At the centre of this nerd heaven was the Internet Café. It was a lively place. About 30 or so computers with Internet connections, local area network (LAN), and network connected printers. For a few Baht you could get online, or blast aliens on the LAN, send messages to far flung places, or browse the news. Teenagers playing networked games made up the majority of users. Ragnarok was especially popular back then. LAN-parties, where the game of choice was Starcraft, were immensely popular and extremely noisy affairs! The "computer shop" as the locals tended to call it was a fun place to hang out, and delivered an experience that is today all but lost. Playing online now tends to be a solitary affair, or possibly a video connected co-operative experience, but it doesn't really capture the high-adrenaline, rambunctious nature of the computer shop LAN.

Back in UK from 2003 until around 2006 I used Quarks Internet café which was situated up Jeffries Passage, just off Guildford High Street. Yeah, I know how that sounds. It was a far more subdued experience compared to the computer shops of Bangkok. After work, I'd stroll up a High Street in the dark and rain, most of the shops closed for the day, and get my daily fix of email and web browsing in the steamy interior of Quarks, before heading home after the rush hour traffic had left the rainswept streets. Quarks was also a great source of International phone cards. The Banana Card was my favourite - really cheap calls to South East Asia. You'd scratch the card to reveal a code. You could then dial a special number, enter the code, and then make long distance phone calls for cheap.

I bought my first "broadband" package around 2006. I got about 64kbps, which after 14.4kbps or even 28.8kbps seemed like some kind of alien technology. But there was now no need to "dial up" to get connected. The need to visit the computer shop became much less pressing, with "instant on" Internet at home. Fast-forward to today and I have a fibre connection at home capable of 300Mbps. How times change.

In the summer of 2007 the iPhone was released and that was the final nail in the coffin for the Internet café. I think Quarks closed down in the tail end of 2008.

Back in South East Asia, in 2011, the computer shops were still popular in Philippines. There were several in SM MegaMall in Manila alone. One I used a lot was the big one just opposite the Dunkin Donuts. I'd get a coffee and then walk over to the computer shop for a session. Netopia down in the basement was another one I used a lot. It was small and cosy. It tended to be much quieter too - good for when you needed to do some more serious work.

I went back to Bangkok in 2016 and wound up in Central Plaza on Rama 3. The Internet café was long gone, replaced by a coin operated PC kiosk on a quieter level. 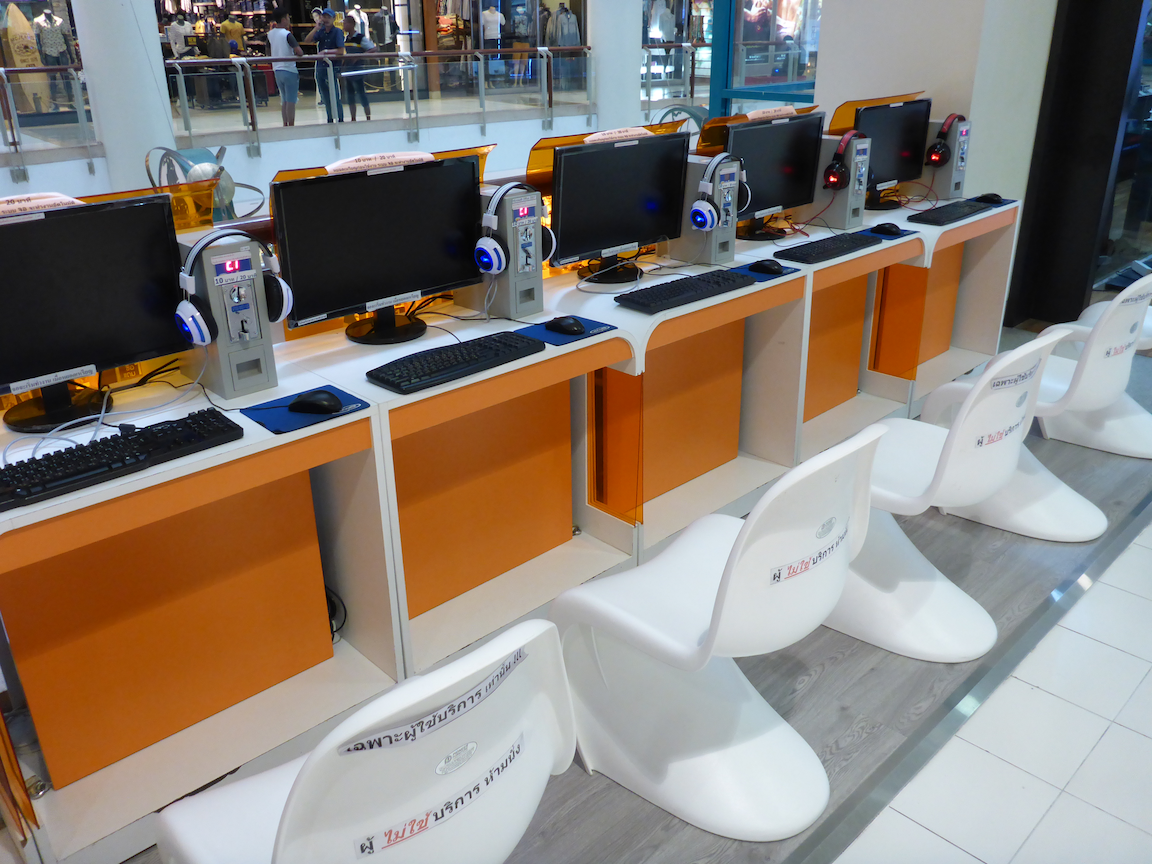 In 2018 I returned to SM MegaMall and was pleased to see that Netopia was still going strong, although the large Internet café opposite Dunkin Donuts was gone. 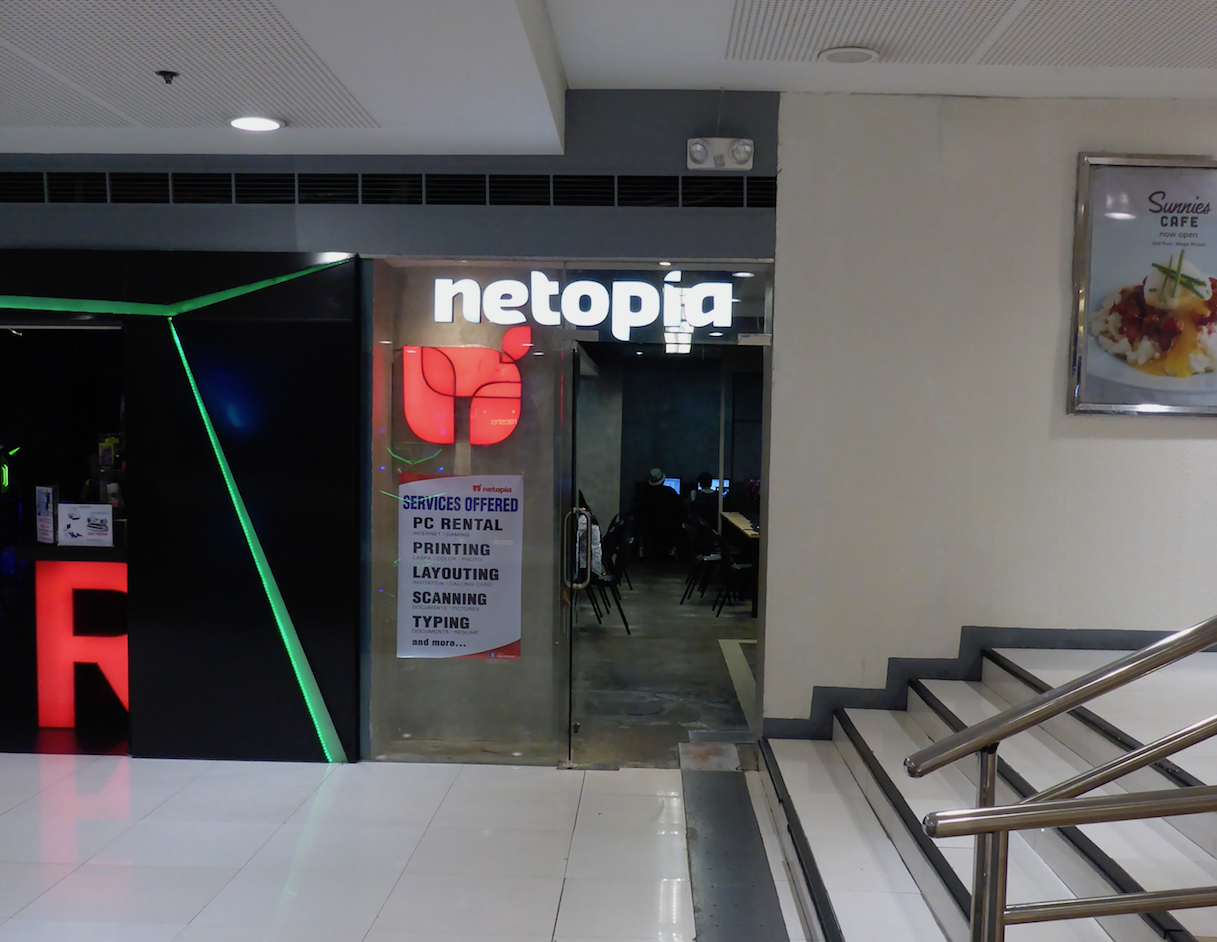 I guess what I liked about Internet cafés was the sense of community. You'd see mostly the same faces, and get to chat and put the world to rights over a coffee. There was this weird feeling of being remote, a stranger in a strange land, and at the same time connected to the whole world.

Back in the UK you don't see many Internet cafés these days. Smartphones, 4G, ubiquitous WiFi, and free messaging apps means they aren't needed any more. But I, for one, will miss them.