The case of the missing clients

It was December 2003 and I was in Thailand for the second time on a month's vacation.

I was dozing poolside late one afternoon, dreaming I was working, when the bleeps of Old Faithful, my Nokia 3310, brought me back to reality, and the sad fact that my first ice-cold Singha of the day had still not arrived. What was that waiter doing to it, I wondered as I pressed answer.

My friend Sean got straight down to brass tacks as was his way.

"Mate's got a problem.", Sean barked down the phone.

"Haven't we all!", I snapped back, disgruntled with being awoken and the fact that my beer appeared to be in the process of being imported from Laos.

"So what is the problem?", I said, softening slightly as Sean was one of my best mates.

"Some problem in IT".

Sigh. I should have known better.

I heard a sharp intake of breath on the other end of the phone.

"No, not you Sean. The waiter here has got my beer and I can see him wandering around down the other end of the pool - and I'm the only one here!"

I heard Sean cackling to himself like a loon.

I was furiously waving at the waiter, trying to attract his attention.

"OK, OK Sean. I'm coming down your way to see Somchai about that condo anyway. I'll pop in."

Still chuckling to himself Sean hung up.

The waiter finally arrived with a warm beer. There was only one thing for it. I asked him to get me another. He marched off muttering in Thai and probably thinking dark thoughts, but by then I was thinking a few dark thoughts of my own.

Two days later, bright and early, I found myself in a cramped office just off Sattahip shipyard opposite Dave. Dave had the look of a kicked bloodhound. If Dave was Chicken Licken, then I figured not only the sky had fallen on his head, but the entire universe had imploded into the bargain. The bags under Dave's eyes told of sleepless nights and a tale of woe. Things turned out to be bad for Dave. Very bad.

"The thing is the girls say they don't know who our clients are any more", Dave babbled.

Those were not words you want to hear before your first cuppa of the day. Dave seemed to ponder his last words at length, as if rolling them around in his brain would provide a solution.

"So are you using a CRM system? Custom database? Did someone drop the database accidentally? Backups?"

Dave looked as if I'd just asked him to decipher a bunch of hieroglyphs, that I'd sneakily turned upside down when he wasn't looking.

"Spreadsheet?", I squeaked out in a voice three octaves higher than usual.

Nothing. Not a sausage of comprehension from Dave. Look, if you wanted a tank cleaned, no matter how huge, or God forbid your pipes plunged, or you wanted to rent an enormous crane, and a blessed tool shed to go with it, then Dave was your man. But, the Lord bless him, he was absolutely flipping clueless about anything, and I mean ANYTHING, to do with computers.

My lips felt dry and cracked as my tongue worked furtively over them. I really needed a cold one. It looked like I was on my own on this one. I would do what I could.

I left Dave pondering the vagaries of life, and walked out into a courtyard. A few men dressed in boiler suits were standing in the shade watching me. A couple of Toyotas sat idle. On the other side of the courtyard was a single story office block. I headed over in search of liquid refreshment - pretty much anything would do.

The staff in the office were all Thai, and nearly all female, as is the way there. They dealt with accounts, sales and marketing, purchasing and so on.

As is typical in nearly every office I've been to in Thailand the fact that a strange foreigner just wandered in off the street didn't seem to faze them at all. They brought me a glass of ice-water without me asking for it, and smiled a lot before plucking up the courage to try out their English. The usual "Where you from?", "What you do?" questions.

I'd tried my limited Thai on Thais before and the results were not good. At least they were great at turning the whole room into paroxysms of laughter, but at actually getting anything across I was hopeless - it was the tones, or at least that's my story and I'm sticking to it.

I noticed one of the desks in the office was empty. A girl with the very un-Thai name of Carol seemed to be the nominated spokesperson when navigating the treacherous waters of dealing with farang.

"Carol, who sits there?"

Carol's tone indicated that was an end to the matter. I smiled at Carol as best as my cracked lips would allow me to.

"Carol. I am helping Mr. Dave. Can I switch this computer on?"

Windows 98 crawled into life on what must have been the world's slowest computer. I glanced at my fake Rolex. It took a full ten minutes to boot.

There was no password protection enabled on the machine, so I clicked Internet Explorer and waited another ten minutes.

I must have really offended someone important in a previous life I thought to myself.

The whole room was holding its breath. Curiosity was etched into the audience's perfectly made up faces.

It was the very question I was asking myself right then. If I'd had a clue myself I would have been happy to have enlightened them.

I had a quick look through the browsing history. Personal Yahoo email account and a penchant for designer handbags. The fog was starting to lift.

"Carol. Can you give me Jom's phone number please?"

It was a few days later when I met up with Jom in a restaurant just off the main drag down from Bangkok. She had excellent English and was obviously as smart as a whip. She'd been working at Dave's company for five years. She'd handled the sales and marketing more or less by herself. And she'd been really, really good at it from what I had been able to work out.

The thing was she had used her personal Yahoo email account to manage and communicate with pretty much all Dave's customers - and there were thousands of them. No one had told her not to.

When she'd got a better offer at a rival company she'd upped and left - and understandably had taken her personal Yahoo email account with her. The other girls in the office just knew that Jom could give them the details of customers if and when they needed them. When Jom had left, the company had been up the proverbial creek. All but incommunicado, at least with customers.

I put the spoon down on a particularly spicy Tom Yum and pushed an envelope stuffed with a month's wages across to Jom with one finger. It grated a bit, but then I blamed Dave really, and I thought he deserved to learn a lesson or two, and that list was worth way more than Jom's monthly wages. The thought of that list ending up in a klong was too much to bear.

Jom smiled a multi-megawatt smile - that smile could probably have outshone Times Square. Jom slid a blue three and a half inch disk across the table. It had a Hello Kitty sticker and "Customer" written on it in pink felt tip pen.

"Thanks Jom", I said, and tucked back into the Tom Yum. 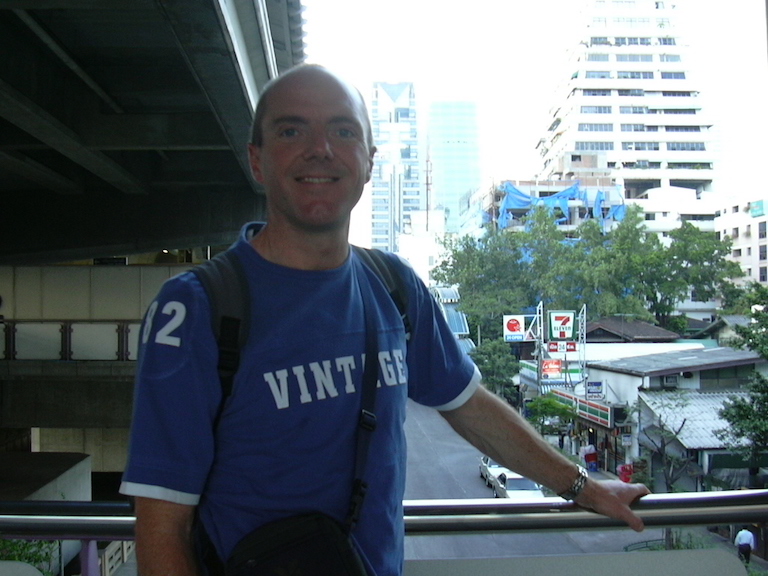